Maya kept falling through the darkness. Shining neon symbols floated through her, one after another.

“What in the world is happening? Where is this?”

As she was thinking about that, it suddenly became brighter, and she landed hard on her bottom.

Looking around, she seemed to be in some sort of large hall. There were stone walls and a high ceiling. Maya was sitting in the middle of a strange figure.

“I've seen this exact thing before,” Maya murmured. “Now that I look at it, it's definitely.....the same figure as in that book Aiko had.”

“It's a magic circle,” suddenly came from behind her.

From behind a pillar, a cheeky looking boy, dressed all in black, appeared.

“Who...are you? Where am I?” Maya asked with a confused face.

The boy grinned, with his arms spread wide in a dramatic fashion.

“Looking at it from your world, it's kind of like a shadow world.”

“Shadow world? I was...falling through the darkness a long time, but....”

Saying that, Maya noticed something about Karura's head.

“What are those? Ears?” Maya asked curiously.

“That's right. These?” He answered casually.

Karura gestured at his bottom. “I have a tail too.”

She looked at it and the tail popped out.

“Wow! T-Totally a cat!” Maya's eyes went round with surprise.

Seeing Maya so flustered, Karura mischievously asked, “Hey now, didn't we meet a bunch of times in the morning?”

Hearing that, Maya went over the morning's events in her head.

“Gasp! You were that black cat?”

“That's right, but I only look like that in your world, this is my true form,” the cat-like boy said, as he bowed.

“Sorry for bringing you to this world by force. Unfortunately, your power is necessary, Savior.”

“Eh? I'm a Savior? What are you saying? More importantly, hurry up and send me back!”

A circle appearing on the ground and sucking her in, arriving in a strange world, a boy with the form of a cat calling her “Savior”.... It was like she was still dreaming.

“Even if you say to send you back, you should still talk with the professor....” Karura clasped his hands, looking troubled, then suddenly called out in a loud voice. “Ventos! Raos!”

In the next instant, he grasped Maya's arm and jumped straight up.

Just like that, the two of them flew towards a corner of the ceiling and stopped, gently floating in midair.

Maya realized her feet were no longer on the ground.

As Karura said that, a black mass started oozing out of the middle of the magic circle.

“An evil spirit that lives in the world of darkness. They're terrible monsters who eat things that have light,” Karura answered with a serious look.

Suddenly, six legs popped out of the black mass, and it started moving with a rustle in Maya's direction.

Maya screamed in a shaky voice, but Karura spoke calmly.

As Karura said that, however, the gigantic black monster opened its huge mouth, and countless tentacles extended out.

“Kyaa!” A single tentacle wrapped around Maya's leg, and she let out an involuntary scream.

The tentacle started pulling them with incredible strength toward the mouth.

Karura stubbornly pulled the other way, refusing to let go of Maya.

Both of them were rapidly being pulled into the monster's mouth. 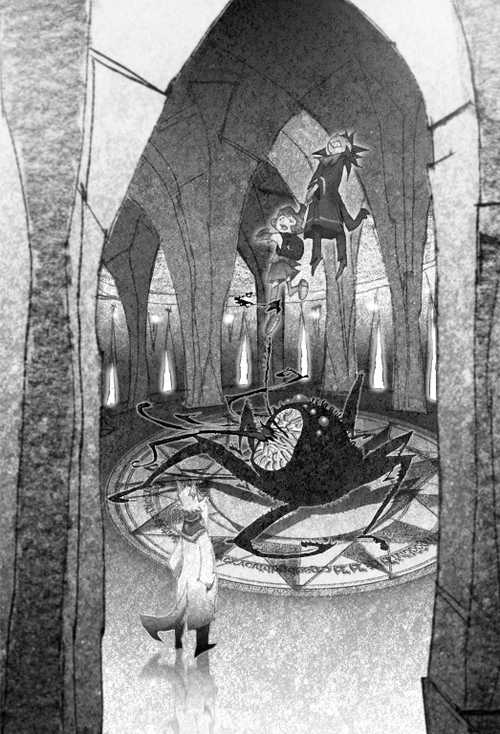 ____At that moment, a bearded man with glasses dashed into the hall.

“Wow! A Dark Elma, in a place like this,” the professor said, sounding surprised. But his voice was strangely relaxed.

“Professor, don't just admire it, do something!”

In answer, the professor began reciting a spell.

The black monster then let out a “Guoooo!”, and its form dissolved like smoke.

“Phew, that was kind of dangerous,” Karura sounded relieved as he lowered Maya to the floor.

The magic circle on the ground had vanished.

“Professor. How did you beat that thing?” Karura asked, as he landed.

“Oh, this and that. Dark Elmas only live in Hedorion, the middle of the dark passageway. So if you erase the magic circle, they should go back into the passageway,” the professor explained proudly, pushing his glasses up.

“Um, Professor or whatever, I don't know, but can't you send me back to my world?” Maya said, breaking into their conversation.

“Ah, it's unfortunate, but I can't do that. The necessary magic circle is gone.”

“W-What did you say?! Dragging people to this kind of world, and then saying you can't send them back? Take responsibility!”

“Now now, Miss. Don't get mad. If I make another magic circle, I can definitely send you back...,” the professor said soothingly. “Ah, pardon me, I am Professor Dogma. I am the Euron Kindom's Elma Scholar. At any rate, this child is the Savior?”

“That's right,” Karura answered. “When I went to the coordinates you calculated, this girl was there. So there's no mistake.”

“Mmm, in that case, we have no choice but to rely on her.”

Saying that, the professor approached Maya, and peered closely at her face.

Maya was also interested, and peered back at the professor's face.

There were definitely cat ears poking out of his head, the same as Karura, but everything else was fairly human. Under his nose was a full beard, and familiar looking eyes shone behind his glasses.

“Huh?” The professor opened his mouth in surprise.

“What? You say I, resemble your father?”

“Hahaha, it's true!” This time it was Karura laughing. “If you get rid of the beard, you really do look like her old man, Professor.”

“Hmm, this confirms my theory,” the professor nodded deeply. “Your world, Sanial, and this world, Shadowin, are mirrors of each other. So it's not strange that people there would resemble us here.”

“Hahaha, but this parent-child thing is shocking,” Karura joked.

“Ufufufu,” Maya chuckled. Coming to such a strange world, Maya had felt quite unsettled, but meeting someone who resembled her dad made her happy in spite of herself.

“Really, what an amusing coincidence. Hahaha!” The professor laughed with them.

“Ahahahahaha,” the three of them laughed.

“...So, what did you mean, I'm a Savior?” Maya brought the conversation back, and the professor nodded.

“The truth is,” the professor frowned, “recently here in Shadowin, many Dark Elma like that one earlier have appeared. They have been running wild and causing trouble.”

“No, that one was just a fledgling. There are higher level ones that are beyond my power to stop.”

“There are even more terrible ones?” Maya was completely astonished.

That monster had been scary enough, she couldn't imagine worse.

“The Elma are...the spirits that form this world. Here in Shadowin, the ones who can freely wield Elma are called Elmanio.”

“In other words, your world would call them magicians,” Karura interjected.

“Ehh, then, couldn't these Elmanio control that monster?”

At that, the professor raised a finger and waggled it back and forth.

“On the contrary. Only Dark Elma cannot be controlled.”

“When Dark Elma come in contact with something, they can dominate its heart with the power of darkness, and turn it into a Dark Servant.”

“Eh?! If I had been caught by that monster earlier, would I have become its Servant, maybe?” she asked, panicked, and the professor smiled.

“That's just it, Maya. Only people of Shadowin can be taken over by Dark Elma, people of Sanial would be safe.”

“A looong time ago...it was foretold that a Savior would come from your world, and become a Black Elmanio, able to control the Dark Elma,” Professor Dogma said, while stroking his beard. “That's why we brought you here.”

“Y-You mean...I...can become this Black something or other?”

“Yes, that's exactly right! Ooh, what a bright child you are! As expected of the Savior.”

“Then, that's how it is. Do your best,” Karura said, as he smacked Maya's shoulder.

Maya raised a single objection, but Karura murmured, “If you need school, we've got one here.”

Professor Dogma beckoned with his hand.

*I included one of the illustrations this time. There are other illustrations in the book, but mostly they're wrapped around the text, which makes them difficult to use.